Even through the foggy air that rendered NBC Sunday Night Football’s usual camera angle irrelevant, Tom Brady and the Patriots continued the Falcons’ misery. The 23-7 win was the most efficient of the season by all counts.

As the Patriots stroll (after this week’s home game versus the Chargers) into their bye week, it appears that the team boasting the best quarterback and head coach in NFL History will once again stick its nose into the annual January-February edition football we call the playoffs.

Much of that is because of Brady, who even at 40-years old remains the best quarterback on the planet, on top of his game.

Brady and Aaron Rodgers will top any level-headed critic’s top quarterbacks list, but what about the rest?

Before we begin the list, here are the honorable mentions that did not make the cut: Mitchell Trubisky, Eli Manning, Joe Flacco, Ryan Tannehill, Andy Dalton, Jimmy Garoppolo, Trevor Siemian.

Here are my top 20 quarterbacks:

20. Jared Goff, Los Angeles Rams: Goff has shown major improvements in year two with the Rams, leading most to believe that the Goff-Todd Gurley-Aaron Donald trio can vault the Rams (5-2) to the postseason. That remains to be seen.

19. Marcus Mariota, Tennessee Titans: Mariota has shown flashes of absolute brilliance, but injuries and inconsistency have been somewhat of a detriment so far. The Titans are tied for first in the AFC South with a 4-3 record, so Mariota may fly up these rankings soon, but he needs to be proactive starting with improvement this season while the Titans have a shot at the division title.

18. Jameis Winston, Tampa Bay Buccaneers: Many predicted the Buccaneers to win the NFC South, if not, make the postseason in 2017. Winston and the Bucs haven’t lived up to the hype so far, as the gradual move toward his lofty potential has stalled a bit. Still, I’d take Winston over Mariota.

17. Tyrod Taylor, Buffalo Bills: After turning heads at Virgina Tech, Taylor deserved better than to be an afterthought of the 2011 NFL draft, falling to Baltimore in the 6th round.

Tyrod Taylor is a gosh darn wizard with his agility. pic.twitter.com/Ly1rcP5b3o

Taylor is more than just a playmaker at quarterback, he’s a leader as well as the main reason the Bills are 4-2 in the midst of a re-building year with not much to work with.

16. Phillip Rivers, Los Angeles Chargers: Rivers has moved a few slots back then where I used to have him (top ten) as the Chargers have consistently missed the playoffs on late-game blunders that sometimes feature an errant Rivers pass.

But the N.C. State product has helped cover up a lot of holes in various Chargers teams over the years and has had a brilliant regular season career. He’s still a good quarterback that deserves better.

15. Kirk Cousins, Washington: There’s no wonder teams (like San Francisco) have been fawning over the idea of bringing in Cousins in 2018 if he cannot reach a deal with Washington. Cousins is as talented as he is confident, and may be suffering from a lack of direction in Washington’s team-building process. If it weren’t for him, this team wouldn’t sniff the postseason. But there are better quarterbacks, 14 to be exact.

14. Deshaun Watson, Houston Texans: Watson has burst onto the scene as one of the game’s most exciting players. Only Carson Wentz seems to hold more potential for a greater career for the current 25-and-under quarterbacks in the league.

Deshaun Watson has already tied Dan Marino’s record for most pass TDs (15) by a rookie in 1st 7 games.

I stand by my assertion that the Browns, Bears and others made a mistake passing on Watson. This can be seen here in my column written for a class taught by J.A. Adande last spring. 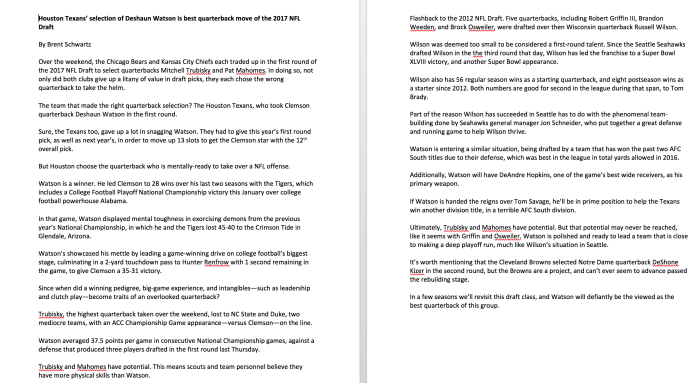 13. Andrew Luck, Indianapolis Colts: I stand by my prediction that Luck will have a better career than Cam Newton, but with an injury that looks to hold him out of the 2017 season coupled with Newton’s brilliant 2015 campaign, I can’t put him above Newton just yet.

Luck’s career can be summed up in one of my tweets last year.

Yep, he did it. D just has to hold. I truly believe Andrew Luck will have a better career than Cam Newton. Book it. https://t.co/yoOVGSMQga

After the Lions missed an extra point to keep their lead at 34-28 versus the Colts, I predicted Luck would lead the Colts to victory, 35-34. Luck indeed did lead the Colts on that go-ahead drive, only for Stafford to lead Detroit back down the field for the win afterwards.

Luck did what he could, scoring 35 points as the defense let up more. That’s been all-too common in Indianapolis during the Luck-era.

The Colts were handicapped by their league-worst general manager Ryan Grigson, who was just fired this past offseason. It remains to be seen whether Luck will stay in Indianapolis and play in 2018, but wherever he plays, a team is getting one of the game’s best quarterbacks. He should be higher, but this is where he goes for now.

12. Cam Newton, Carolina Panthers: Considering his extraordinary 2015 season, it’s disappointing to see what appears to be his mental psyche holding Newton back from being where he should be, which is a top-five quarterback.

The 2017 season has featured a little bit of everything for Newton. A four-touchdown performance in a road win over the Patriots. A 34-16 home loss to the rival Saints, which featured three Newton interceptions. Those games were just one week apart. Newton is one of the most talented players in the history of the league, but maturity seems to be an issue.

11. Alex Smith, Kansas City Chiefs: It seems Smith is finally starting to shake off his game-manager label at age 33. In 2017, Smith leads the NFL in passer rating (120.5), touchdown-to-interception ratio (15:0), yards per attempt (8.68) and completion percentage (72.4). Although the Chiefs have lost two straight games, Smith is still in the thick of the MVP race and is beginning to prove himself as one of the league’s best quarterbacks.

Since 2015, Smith’s 29 wins are second only to Brady (32). But Smith’s postseason record in Kansas City is just 1-3, with his only win coming on the road against Brian Hoyer and the 2015 Houston Texans. He may vault up this list soon, but with immense talent on both offense and defense around him, Smith has more to prove.

10. Matthew Stafford, Detroit Lions: The NFL’s highest paid player has shown a knack for regular season game-winning drives and covering up for a lack of overall talent on the middling Lions.

But Stafford is 7-49 in his career against teams finishing above .500, and has yet to win a playoff game. He’s a very good quarterback, but much of what defines a quarterback’s career is his play in the postseason.

9. Dak Prescott, Dallas Cowboys: Few quarterbacks are as poised as the young Prescott, as the 24-year-old’s 16-7 record and 102.8 passer rating symbolize his immediate success. Prescott has similar escapability to Russell Wilson and running power to Cam Newton. Add in his passing accuracy (66.2 percent) and there’s a reason why the Cowboys have suddenly transformed into one of the league’s most dangerous teams. Of course, Ezekiel Elliot and the offensive line are of big help. The Prescott-Carson Wentz debate will surely wage on for years to come in the NFC East.

I said it last year & I’ll say it again…Carson Wentz & Dak Prescott will be the new Manning & Brady. #CowboysNation #Eagles

8. Ben Roethlisberger, Pittsburgh Steelers: Had this list been done in the offseason, Roethlisberger surely would have made the top five. But the 35-year-old passer has clearly taken a step back as he braces for retirement.

Roethlisberger’s postseason resume includes a 13-7 record and two Super Bowl wins (three appearances). But since 2011 he’s 3-4 in the playoffs and has yet to reach another Super Bowl. With an improving defense coupled with Antonio Brown and Le’Veon Bell as surrounding talent, Roethlisberger can still win games and lead the Steelers back to the Super Bowl.

7. Derek Carr, Oakland Raiders: Carr had gradually improved in each of his first three seasons before running into a second injury in the past 10 months earlier this season. He returned to put on a extraordinary performance last Thursday night against the Chiefs.

Derek Carr has 8 game-winning drives in the 4th quarter/OT since start of last season, 2nd in NFL behind Matthew Stafford (9). pic.twitter.com/G2o0Ltf3j3

6. Matt Ryan, Atlanta Falcons: Despite the rough start to the 2017 season, the reigning NFL MVP gets the benefit of the doubt. Like most of the the other passers below him on this list, consistency is a major problem. But Ryan is situationally one of the best clutch quarterbacks in the NFL. Situationally, meaning his knack for leading game-winning drives in the regular season. However, Ryan hasn’t quite shown that he can be a consistent big-game quarterback. The rest of Ryan’s career will be defined in the postseason. But he has to get back there first.

5. Carson Wentz, Philadelphia Eagles: In Wentz’s first season, he proved his worth as a capable young passer with one of the league’s worst wide receiving cores. Some criticized him for dinking and dunking to his multiple running backs in 2016, but who else was he supposed to throw to? In the offseason the Eagles added wide receivers Alshon Jeffrey and Torrey Smith to compliment tight end Zach Ertz, which has not only opened up their airways for former first-round pick Nelson Aholor, but Wentz himself. The second-year quarterback is fourth in the NFL with 7.98 YPA (yards pet attempt) and has the Eagles sitting on a league-best 6-1 record.

4. Drew Brees, New Orleans Saints: Despite the astronomical passing numbers, it appeared the 38-year-old Brees had been taking steps back, which is normal for a quarterback of his age. But Brees is still arguably the games most accurate passer, and his consistency has trickled into 2017. Brees has a 100.0 passer rating as the Saints are riding a four-game win streak that has them in first place in the NFC South. It’s consistency that sets him apart from the passers below him on this list.

3. Russell Wilson, Seattle Seahawks: There is no better quarterback in the league in terms of using a combination of awareness and escapability to make plays, not even Aaron Rodgers or the quickly-improving Wentz. This dual-attribute has been put to the test in recent years more than Wilson would like, as the offensive line is a wasteland that is hurting the Seahawks’ chances of being a true Super Bowl LII contender.

The touch on this @DangeRussWilson TD pass… 👌👌👌 #Seahawks pic.twitter.com/raQqkTDpVi

But since 2012, Wilson is second only to Brady in regular season (60) and postseason (8) wins, which is indicative of his leadership and clutch play as much as it is the Seahawks’ defense.

2. Aaron Rodgers, Green Bay Packers: It’s never good for the NFL when one of it stars is lost (possibly) for the season. Judging by his often-aired commercials and consistent jaw-dropping plays, it’s worth arguing if Rodgers is the face of the league. Still, in terms of all-time rankings, another Super Bowl win or two is a must for Rodgers to catch this next quarterback.

According to @AdamSchefter, Aaron Rodgers has a chance to return near the end of the regular season. https://t.co/wSXW7Me8T9

1. Tom Brady, New England Patriots: Argue if you must, but Brady remains at the top of his game in 2017.

View all posts by Brent Schwartz

One thought on “Ranking the NFL’s Top 20 Quarterbacks”